In Christian iconography, Sedes Sapientiae ("The Throne of Wisdom") is an icon of the Mother of God  in majesty. When the Virgin is depicted in sedes sapientiae icons and sculptural representations, she is seated on a throne, with the Christ Child on her lap. For the more domestic and intimate iconic representations of Mary with the infant Jesus on her lap, see Madonna and Child.

The Uncontainable), [1] an epithet mentioned in the Acathist Hymn and present in the Greek East by the early 11thcentury, when the Byzantine-inspired enamels were made in Germany for the Matilda Cross (illustration left). The type appeared in a wide range of sculptural and, later, painted images in Western Europe, especially about 1200. In these representations, some structural elements of the throne invariably appear, even if only handholds and front legs. For hieratic purposes, the Virgin's feet often rest on a low stool.Later, Gothic sculptures of the type are more explicitly identifiable with the Throne of Solomon, where two lions stood, one at each hand. And twelve little lions stood upon the six steps on the one side and on the other.

The Sedes Sapientiae icon also appeared in illuminated manuscripts, and Romanesque frescoes and mosaics and was represented on seals. The icon possesses in addition emblematic verbal components: The Virgin as the Throne of Wisdom is a trope of Damiani or Guibert de Nogent, based on their typological interpretation of the passage in the Books of Kings, describes the   Throne  of  Solomon  (I Kings 10: 18–20, repeated at II Chronicles 9: 17–19).

This was much used in Early Netherlandish painting in works like the Lucca Madonna by Jan van Eyck.

More recently, Sedes Sapientiae is for example the  motto  of  the  Katholieke  Universiteit  Leuven  and the Université Catholique de Louvain, founded when Latin still was the academic lingua franca. Here the phrase is also a play on words, since the  University itself is a major seat of learning, i.e. school, in the Low Countries.

In September 2000, at the close of the Jubilee Year,  Pope John Paul II  commissioned the Slovenian Jesuit artist Marko Rupnik to create in mosaic an icon of the Virgin sedes sapientiae for the world's Catholic universities;

it has since been passed reverently among Catholic institutions in a number of nations.

​In  the  Roman  Catholic  tradition,  the epithet  "The  Seat  of Wisdom" or "Throne of Wisdom" (a translation of the still-used Latin sedes sapientiae) is identified with one of many devotional titles for the  Mother of God. The iconographic realization of the "Seat of Wisdom" in Italy, especially, is referred to as the Maestà.

The phrase  Sedes Sapientiae,  which was characterized in the 11th  and  12th  centuries, by Peter Damiani and Guibert de Nogent as likening Mary to the Throne of Solomon, refers to her status as a vessel of the incarnation, carrying the Holy Child. As the phrase associates the Blessed Virgin with glory and with teaching, Madonna-images in this tradition are especially popular in Catholic imagery, while Protestant churches often downplay veneration for Mary (and other saints), and the veneration of images.

Our  Lady  of  Louvain 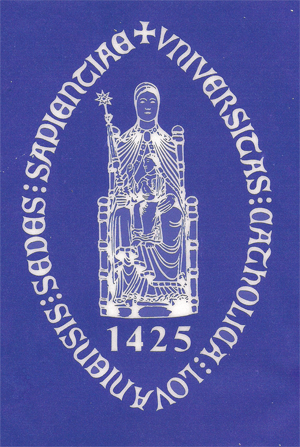